It feels surreal writing about our dear Brother, Class Mate and Friend Paul Kyegombe whom we called Kyeggie, Paulo, Plougher, etc esp as we are yet to recover from the news of his passing that struck us on the night of Tuesday 14th April 2020 and caused great sorrow to us, many of whom had first met Paulo soon after we joined St Mary's College Kisubi [SMACK] as young Teenagers in Senior One on Monday 18th February 1985. We thank God for the opportunity to have experienced our formative years with him.

Looking back to the time we first met in early 1985, it was immediately clear why Paulo had come out as the 2nd best Pupil in the Primary Leaving Examinations of 1984 as he went on to dominate us in Academics. One of the things that struck me the most was how hard he worked to excel in Academics esp from Day 1 of the School Term as many of us often tended to "chillax" and then waited to study very hard from "first principles" very close to the end of Term by studying late into the night or even the whole night [what we called transnights] or waking up very early in the morning usually between 3am and 4am to study [what we called "banging early birds" following on from the old English Proverb of "the early bird catches the worm"] yet Paulo as well as others such as Dr Samson Kironde a.k.a. Sox, Dr Dickson Opul a.k.a. Opeluxy, Frederick Kasadha a.k.a. "Fred the Mathematical Fly", etc who were like him i.e. having studied from Day 1 of the School Term would be chilling at that time simply revising from their carefully written summary notes - what we called "data" from studying throughout the Term incl already solved questions [what we called "cut numbers"] from the ends of the Topics in the Text Books such as the famous Physics Textbook by Abbott or the Pure Maths Textbook by Backhouse! It's something that I am trying instil in both our Children and the Children of Family & Friends I interact with [much to the Children's chagrin I dare say] but hopefully the habits will be formed and stick well into their Adulthood.

The other thing that struck me was Kyeggie's great humility despite his being very gifted - he almost always went the extra mile to encourage us his Class Mates to seek to be the best that we could be by reminding us that we were indeed very capable and hence need not be despondent when we had suffered setbacks esp in our Academics but rise up instead and work even harder to excel, and was thus very receptive when approached by other Students to explain things that they hadn't understood in Class. He also went ahead to occasionally correct some Teachers when they may have "mis-explained" some topics - not all Teachers took it well and he was once chased out of a Maths Class ... luckily, the Teacher later realized that Paulo was right.

Whereas a lot has been said about Paulo's academic excellence, what is not said as much is how he still found time to be a very active Sportsman plus a Cartoonist given how hard he actually worked to excel in Academics! We shared the same Class Stream from S2 to S6 where his more mischievious side came to light as he used his passion and skill in Fine Art to draw what are akin to today's "Editorial Cartoons" in the Newspapers, to capture the topical issues of the day for young Students in School - such as who did what faux pas on the Sports Field; which School House had lost or won a Tournament; how different Students fared at the "Socials", Seminars, Trips, etc; who had had a run in with the Teachers or School Administration; etc but then took the "precaution" to name the Cartoons as "Not Him"even if it was clear to all and sundry who was being caricatured! Most times the "victims" used to laugh it off and his Cartoons [as well as those of our other Class Mates Noah Edwin Mwesigwa a.k.a. Sodium and Alfred Julius Agaba a.k.a. Alfredo] came to be something we would look out for.

The measure of the man indeed who abided by the SMACK's Motto "Duc in Altum"meaning "Launch into the Deep"! He always sought to excel in whatever endeavour he embarked on while keeping a healthy balance between academics and non academics as well as keeping in touch, and this is something we can honour him by via emulating him.

We, and others who have been around Paulo over the years, have truly stood on the shoulders of a giant and we will do our best to be good Uncles, Guardians, Mentors, etc to his dear Son Solomon.

My brother the genius ... fare thee well until we meet again We first met with Paul in mid February of 1978 joining St. Stanislaus Mug... 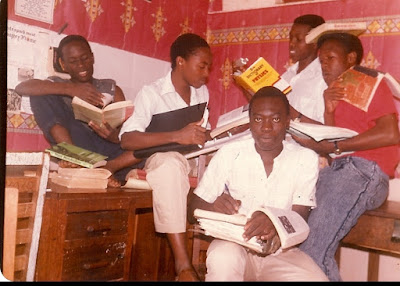